They say it's not the ring that matters, but what the ring means. I'm all for that philosophy, but what if you get the perfect ring? Can it be about both...?

The ring, as it turns out, was purchased last August in Nassau. Paul and I heard that the jewelry stores there have good deals and so our first night on the Disney cruise, he turns to me and says, "Do you want a real sapphire for your ring?" He was referring to my class ring from Penn State and he knew the answer was yes.

So we trolled the myriad jewelry stores up and down the main drag in Nassau that afternoon as the ship was docked. We found a sapphire that fit the ring and at the same store, I saw this diamond ring and instantly fell in love. Here's a pic: 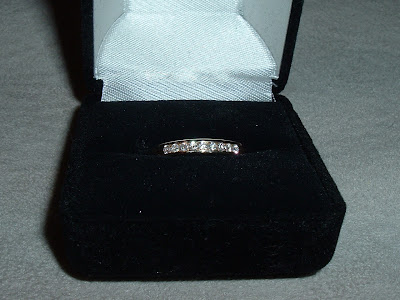 So we're already making a major purchase and I didn't actually expect or even want him to buy it right then... We go to Atlantis and tour the joint (a very cool-looking resort, BTW) and swim in the ocean (illegally, we think, as only resort guests are allowed to use their beach, but WTF, we think, let's try it. Worst that happens is we get thrown out).

A thunderstorm rolls in and so we have to get out of the ocean, so we head back into town and Paul says he forgot toothpaste and needed another battery for his camera. ("But I brought plenty, Love..." "No, I like a certain kind." "Since when?" That's about when I realized he was up to something clandestine and I let him go.) I wanted to go shopping for Maggie and her boy Joe (just turned 2 a month ago), as they were bunnysitting while we were gone. We had just moved into our new house, so it was kind of an adventure for them, I'm sure, navigating around unpacked boxes and the mess that comes with combining two households into one.

So the 45-minute break was just fine by me. We met up where we parted and I saw Paul coming from the direction of the jewelry store, not the toothpaste and electronics store. Hmmmm, I wonder...

So that's the ring I fell in love with and that's the ring he bought in Nassau and that's the ring that hadn't left my finger for more than 30 seconds to show people until yesterday afternoon, when we dropped it off to get resized. I've waited 29 years to have a diamond ring, but now that I have one, I can't wait to have it back. Apparently one more day will kill me. ;-)

If the picture doesn't show it, it's a band the same width all the way around with 9 little diamonds in a channel. I never wanted a big rock and for the past few years, I've felt like a solitaire wouldn't fit me very well. The sapphire in my class ring, which I wear every day, is the biggest rock I think I'd ever want to own, or, at least, wear on my finger. As it is, it gets in the way sometimes when I want to, say, put my hand in my jeans pocket. But I put up with it because I love the ring and it means so much to me.

I'm more subtle in my jewelry tastes on an everyday basis than a big solitaire, or even a medium-sized solitaire. Paul says I have to explain to everyone who sees the ring that it's the one I fell in love with -- I called it "perfect" the first time I saw it -- so he doesn't look like a cheapskate for buying such a modest ring. I still say it's perfect... :-)

Tell us the story behind your engagement ring!
Posted by Dana Gillin at 2:00 PM