A few weeks ago, Paul and I were in Toronto mixing business with a bit o' pleasure (like we do). I took his working day to explore the Toronto Zoo. The public transportation system isn't easy to understand if you're a newbie, but once you get to the zoo, it's worth it! (If you want my exact route from downtown to the zoo, email me.)

At any rate, I walked around the zoo for 5 hours (including one 20-minute break to massage my aching feet) and met a very nice zoo member at the reindeer enclosure. We walked around together after that for about half an hour and joked and laughed about the animals. Then I had to leave and he returned to the tigers. I did not get his name, but he helped turn the day from one in which I was enjoying the zoo by myself to an experience where I met a new, albeit temporary, friend.

Then last Friday, Paul and I flew to LA and hung out in Disneyland for 5 days. Ahhh. We stayed at the Grand Californian, which is a very nice hotel, and we stayed in a very nice room. Thank you, Disney!

I could get used to Southern California weather! The sun was hot and strong, the air was refreshing, the pool was delightful, the whole Disney atmosphere was wonderfully fun. 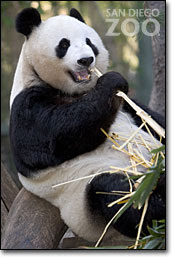 On Monday, Paul and I ventured down to the San Diego Zoo (we'll explore the Wild Animal Park during our next visit to southern California) and spent a glorious day seeing all the animals. We spent something like 5 hours there and only saw 2/3 of the park. It's definitely a multi-day excursion if your goal is to see every animal!

The famous giant pandas were sleeping -- one behind a tree and one with his bountiful bum pointed right at those who came to gawk at him. The okapis (my new favorite wild animal) were busy using their 18-inch tongues to get the very best leaves off the trees.

It was a great day. And Paul bought me a snowshoe hare (not a real one, don't worry!) to commemorate the trip. I didn't have any room for it in my luggage, so I took it on the plane home with me. It was funny watching the woman next to me figure out why on Earth a grown woman with a wedding band on her finger was carrying around a white stuffed bunny. "Is it a gift for someone back home?" (It's amazing how nosy people can be.) "It's a gift for me," I said. She didn't have a good answer to that one.

Again, we were mixing a few days of vacation with a business trip -- Paul spoke to a bunch of Disney execs on Tuesday after a morning visit to the LA Times with his new friend, Ed Padgett. The meeting was just too early for me, so I skipped it. I did want to meet Ed, but it would have meant getting up at 5:30. He sent a great dessert cook book back to me, though. Thanks, Ed!

It was a wonderful trip to LA. Anaheim was lovely. I'm about zoo'ed out, though. For at least a few weeks.
Posted by Dana Gillin at 11:21 PM