No hitter for Sox's Lester 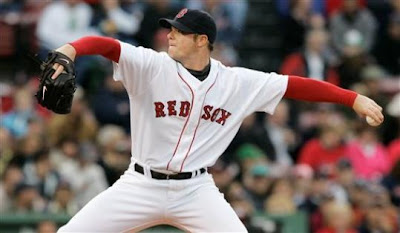 Just a year after chemo, Jon Lester tonight pitched a left-handed no-hitter. It was also the 24-year-old's first complete game in the big leagues. It was an amazing and electric game, especially during and after the 7th inning, when the buzz about a no-hitter really starts to get going. This kid's story is better than any Olympic Moment the networks can play during the Games. He's an inspiration. There were a lot of people very near tears tonight in Fenway. Paul and I were two of them.

Terry Francona, the Sox manager, apparently has taken a father figure role to Lester, especially during his cancer treatment and recovery and comeback. He said in the press room after the game, "I feel like my son graduated and my son threw a no-hitter." (Terry's son graduated from UPenn this morning, then he came up to Fenway for today's game.)

Jacoby Ellsbury, whom I'm madly in love with both because he's gorgeous and because he's a phenomenal baseball athlete, made what some are calling the play that enabled the no-hitter.

It's a great night in Boston. We're very proud of our Sox tonight.

I didn't marry him for his money. I married him for his Red Sox tickets. ;-)
Posted by Dana Gillin at 11:34 PM

He's got to be worth the tickets.