On the whole, our 13 days in were wonderful, particularly the time in . There were a few lowlights, though:

Crime - On our second day in , my pocket was picked on a crowded subway by a young gypsy girl. The wallet was in a double-buttoned pocket in my cargo pants, but the thief took advantage of the packed train and her tiny hands to undo the buttons and work her way in. She was skilled enough to take the money while leaving the wallet. This was a clever tactic because, while I could feel something rustling in my pocket, I checked and felt the wallet, which made me mistakenly think all was okay. I was carrying too much money and was stupid for leaving the wallet in a pocket in the first place.

This is the third time I’ve been the victim of crime in . A videocam was stolen out of a latched camera bag in years ago and more recently I had a digital camera swiped from a checked suitcase. I guess the lesson is that you can’t be too careful in .

Cost – The Euro hit an all-time high against the dollar while we were in and that caused some pain. As a rule of thumb, anything that costs $1 in the costs €1 over there. So pretty much everything was 50% more expensive. I don’t think we had a dinner for under $100, and that includes modest bistro cafes. Even wine, which is usually a bargain in , was about the same cost as in the

The countryside was a little cheaper than , but food was costly everywhere. The only bargains I found were wine in and the ubiquitous pain au chocolat (chocolate croissant), which are about €1 everywhere. There’s no sign of the Euro falling anytime soon, so visitors to the popular destinations like and should be aware of that. I understand that and the eastern European countries are still a pretty good value.

– We had read good things about , which is ’s second largest city, and had planned to spend two full days there. However, our experience was disappointing. The traffic into and out of the city was terrible, and our overall impression was that is a smaller version of with all of the cost and traffic and none of the magnificence. If it was the first city we’d seen in , we’d probably have been impressed. But I thought it was a pale imitation of its cousin to the north.

Drivers – French drivers are probably the worst I’ve ever seen, worse even than the Chinese. They change lanes without warning, don’t signal for turns and drive at high rates of speed punctuated by sudden stops. Part of the problem is the narrow, twisty roads, but other parts of have the same characteristics and the drivers aren’t nearly as bad. I found the Italian drivers to be speed demons and borderline maniacal, but they were basically good drivers. French seemed to be Italians without the skill. 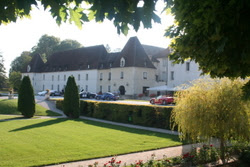 Rudeness – I expected Parisians to be rude and certainly wasn’t disappointed, but I didn’t expect to encounter the same experience in the countryside. The two other times I’ve toured the countryside, I’ve encountered mostly warm and friendly people. On this trip, however, we were treated coldly and even rudely. The most memorable incident was at Chateau Gilly (above), which canceled our dinner reservation when a large group of British auto enthusiasts took over the restaurant. We were offered free drinks in the bar, but after finishing a second glass of wine were presented with a bill for $40. We refused to pay and fortunately didn’t get a hassle, but the whole experience left us unable to recommend this chateau.

On the whole, these were minor things. If you do travel to any time soon, bring lots of money. And keep your wallet where you can see it.

Great blog. I really liked it. I have also created a lens in same niche. This is my first time, hope u guys like it. Here’s a brief intro. You're over 50 and if you have children, they will be gone soon or are out of the house already. If you are married or in a long term relationship, you are wondering what do we do with each other now? You have the opportunity to get to know each other again and one of the best ways to do this is by traveling together. If you are single, traveling is also a great option to explore new places, try new things and meet new people. The options to travel when you are over 50 are bright and there are many ideas open to you. For more detail visit here http://www.squidoo.com/Travel-over-50/