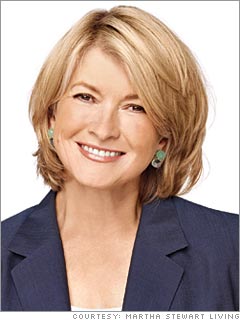 Old folks like me remember an early 1970s book and cult film classic called The Stepford Wives (remade in 2004) . The plot revolves around a town where everyone lives in wedded bliss and all the women are perfectly submissive and attending to their husbands. It turns out that the husbands have actually been replacing their wives with robots who do nothing but cook, clean and attend to their every need.

After spending the last few months learning about Martha Stewart, I'm convinced that 's Homemaker is the embodiment of the Stepford story. Dana is very crafty and she cooks a good meal, but she's never been all that domestically inclined. A few months ago, however, she began watching a lot of Martha Stewart on TV and a change came over her. All of a sudden, she's baking cookies, sewing and offering to cook gourmet meals with startling frequency. I was at first a little stunned by these developments, but now I'm learning to love them.

So here's my theory: The Stepford Wives story is indeed coming true, only the instigators aren't men in a small town but rather a female ex-con media titan. Whether intentionally or not, Matha has accomplished in flesh and blood what those sinister husbands required high technology to do. She’s made women want to be domestic.