We're in New Orleans for Thanksgiving and yesterday took a tour of the devastated 9th District and areas east of town near the levees. I'm like many Americans, I suppose, in that I had largely put the plight of New Orleans residents of out my mind two years after Hurricane Katrina. However, the extent of the damage here snapped me back to reality. Thousands of homes have been destroyed or damaged beyond repair. Even those that did survive are so badly riddled with mold that it's unlikely they can be repaired. Our hosts told us that hundreds of thousands of people have left the area, most never to return. Many of these people are lifetime residents who never conceived of having to flee and put down roots somewhere else.

There are signs of hope. Rebuilding is going on all over the city and some of the wealthier neighborhoods near the breached levees look almost back to normal. The highlight of our visit was stopping by Musicians' Village, a complex of 70 homes being erected by Habitat for Humanity with the help of musicians Branford Marsalis and Harry Connick, Jr. About 20 homes have been built and residents are moving in.

We ran into drummer Bob French, leader of the Original Tuxedo Jazz Band and a local legend of sorts. We rapped with him for nearly an hour on the porch of his new home in Musicians' Village. He told us about the resilience of the New Orleans musician community and the many local jazz legends who are now his neighbors. He gave us an armload of his CDs and invited us to come hear his band as his guest next time we're in New Orleans. You can bet we will.

Here are a few photos I took on our tour. You can see more on my Flickr album. For background on the story, see this excellent flash video by the Times-Picayune newspaper. Happy Thanksgiving. 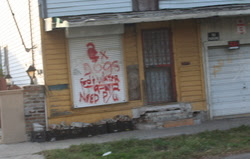 The ASPCA scoured the territory, marking homes where live animals were found so the pets could be fed and sheltered. 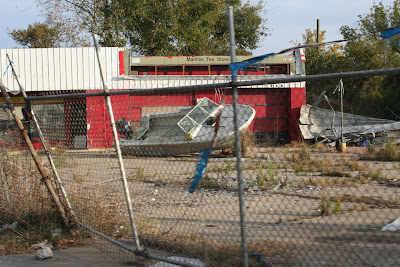 This boat came to a rest in a tire store parking lot two years ago and hasn't been moved since. Many people are living in trailers outside their devastated homes. 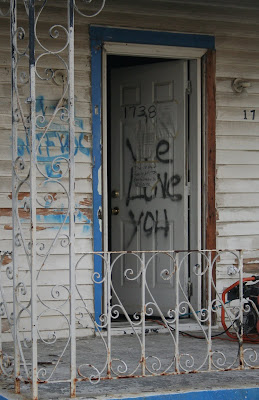 One family that returned to its shattered home scrawled a message of hope on the door. 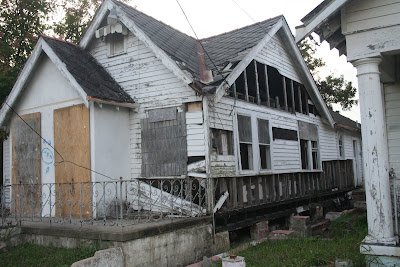 The high-water line was still visible on the inside of this shattered home; it was about a foot over my head. 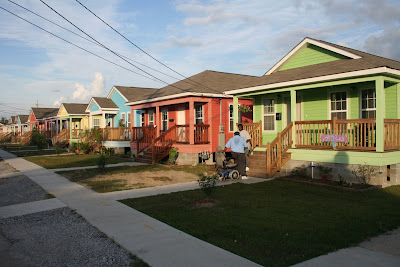 Signs of hope: some of the brightly colored new homes built by Habitat for Humanity.
Posted by Paul Gillin at 2:33 PM