Since the Modern Bride article is called "Wedding Identity Theft" and is all about stealing ideas from other weddings, I thought I'd come clean about where I got the idea about our wedding program design. I stole it.

My brother Brett got married about two months before I did -- to a wonderful woman named Sara. They were joking with me the whole day about stealing all of their ideas, but really I only took one -- the program design. There's nothing wedding guests need more during an outside summer ceremony than a fan to move the air around. I added ribbon, tried to be a bit more whimsical with what we called "The Cast of Characters," and changed the colors and theme to match our wedding.

The key is asking before you take. Let the person know you are really trying to flatter them by borrowing their very creative idea. And limit that borrowing to one idea per friend. If you borrow six ideas from the same person, not only will you look like you can't come up with an original idea on your own, but you'll also probably annoy the pants off the person you're trying to compliment.

On that note, on with the pictures!

Here is Sara and Brett's program: 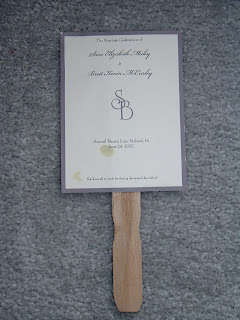 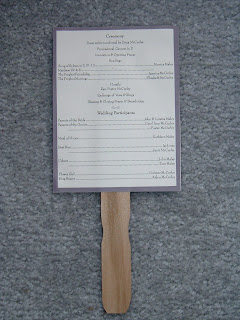 And here are pix of Paul's and mine: 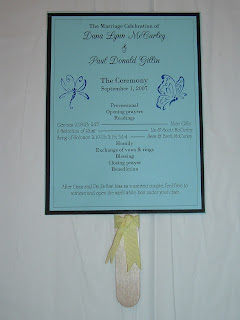 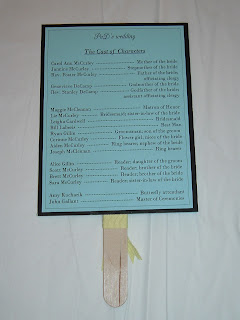 Email ThisBlogThis!Share to TwitterShare to FacebookShare to Pinterest
Labels: wedding_programs

really nice and unique wedding detail. been busy looking for a unique detail for my wedding, as well.