We are thrilled to announce that we're expecting twins! The whole process of being pregnant so far (19 weeks today) has been an adventure, to say the least. Twins are an entirely different story from singletons, says everyone who's ever been pregnant with twins. I can safely say, though, I haven't gotten actual "morning" sickness, which I'll be forever grateful for!

I'm mainly constantly and completely exhausted, which makes even walking Jacoby (our greyhound, whom joined our family/zoo December 2 of last year) difficult with any regularity. I long for the days (and he does, too!) when I can walk with him again for 4 miles, but this time with 2 babies in tow! I miss those long, relaxed walks. We've been mainly walking just around the few blocks near our house lately. Paul walks him when he's home, and I tend to walk him when he's away, but I've been struggling to do so. I finally hired a sophomore student from the high school across the street this week to be his dog walker, and she just loves him. Today was his second day with Jennifer, and he already got the idea that she will happily walk him around and bring him home. Yesterday, he didn't know if she was going to dognap him or what, and made his walks very short because of his uncertainty. Today he got it and she commented about how happy he was on his walks. Which makes me happy, too, and grateful that I found Jennifer, who is a sweet, sweet girl who loves animals.

Anyway, as far as "symptoms" of pregnancy go, I've gone through several-week bouts with nausea, heartburn, incredibly itchy skin, headaches, and a few other "symptoms" (as if pregnancy was a disease!) that I fortunately forget. Backaches and pelvic floor aches and exhaustion have stuck around more than a few weeks, but I keep reminding myself that I'm a lucky, lucky girl not to have cuddled with the toilet for 3 or 4 months straight like I know a lot of women do. Paul's MUCH nicer to cuddle with, and I've been doing that whenever I can.

It's amazing how Nature preserves the species -- that you forget so soon (and are so willing to forget) the negatives of a process like creating and delivering a baby (or two!). Or else why would anyone get pregnant a 2nd time?! Selective memory is already proving to be a wonderful thing!

As for seeing the little nuggets, here are a few ultrasound pictures you may like: 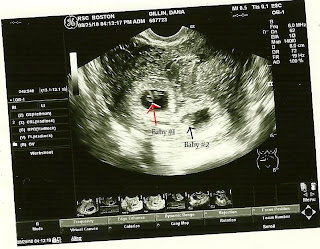 Both little babies just starting out at 7 weeks; we saw their hearts beating like crazy! 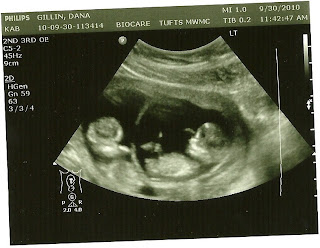 Baby A at 12 weeks; amazing how much they grew and changed in 5 weeks! 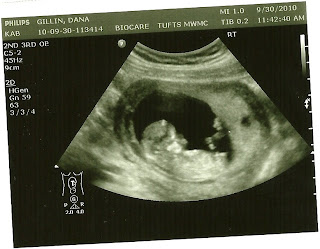 Baby B at 12 weeks; they look like actual babies now!

Every twin pregnancy in our OB's practice is considered high-risk, which is actually great for us, because we get more monitoring and more ultrasounds and more doctors making sure everything is going well. The perinatologist (high-risk OB) complements our own OB and we have appointments with both. This afternoon, we're getting the all-important 2nd trimester/halfway there ultrasound, where they check that the babies are both growing all their little baby parts appropriately. We also get to find out the genders, which we're both really excited for!

After the gender discovery, we get to do things I've been waiting to do, like register (at Babies R Us and Amazon) and pick out things like curtains and rug for the nursery. The walls are a beautiful light mint green. If both babies are boys (a 25% chance), we'll decorate some accessories in pastel blue. If both are girls (a 25% chance), we'll decorate in pastels pink or purple. If one is a girl and one a boy (you guessed it, a 50% chance), we'll go with yellow and more green with splashes for each baby of pink/purple and blue.

So here's where I'm humbled by the hard work that people around me have put in or are going to put in to celebrate and welcome our babies to the world. Paul is working every weekend to paint the rooms on the 2nd floor of our house (and the hallway down to the 1st floor, which is no small feat), including the nursery (light mint green), the massage room (a cool light/medium blue; the room will become the play room when the babies require such an animal) and the 2nd floor hallway (all hallways are a very warm neutral brown to balance out the colorful rooms). He's also going to tackle the 2nd floor bathroom (light aqua with dark brown rugs) and do some much-needed work to make that not only usable, but also inviting and attractive. So Paul hasn't had a day off since about August. He literally works from morning until late at night every day on either work (PGC's 5th anniversary is today!!!) or the house. Since we're playing hotel to some family (parents, Mom, and one/two others) during the baby shower weekend, Paul's gotta basically get the house done and ready for entertaining by New Year's.

I'm humbled by his hard work day in and day out. Especially since when he's working on the house on the weekend, I'm mainly laying around and resting, as I don't have energy for much more. He works hard to keep the paint fumes away from me, which I appreciate because I've heard horror stories about how women have painted their nursery and the next day (I kid you not) have miscarried. No thanks to all that. Paul doesn't want me anywhere near fumes of any kind -- cleaning agents, paint, exhaust, whatever. Also, he lifts EVERYTHING for me. He's been carting the laundry baskets up and down 3 flights of stairs since July. He's been my short-order cook; whatever I want, I just text him and within 30 minutes, it's brought upstairs to me. He goes grocery shopping and gets me whatever I want. He's my angel and my hero and he treats me like a queen. And I have to say, I didn't think it was even possible, but I love him more now than I ever have before. He's stepping up in ways I couldn't have even imagined a year ago.

As for other people who are working for our babies, Carol Ann (mom), Jannine (stepmom) and Maggie (best friend) are busy organizing the party for the babies known as the baby shower. I can't wait to see what they come up with! We're having the shower at my favorite restaurant, Bullfinchs in Sudbury, which is where we had the rehearsal dinner for the wedding. There is simply no better restaurant in Metrowest. Family-owned, the place has never failed to completely impress me whenever I've gone there. And in the 10 years I've been living in the Framingham/Marlborough/Framingham area, I've been probably 20 times.

Last but absolutely not least, Foster (dad) is making us two cribs in his woodworking shop in his basement out of maple, walnut and cherry woods. He's researched safety measures galore, patterns, even which finishes are safe for cribs (kids tend to chew on the railings when they get to a certain age), and he's started cutting the slats this week. He'll bring one crib up and assemble it here when he comes on New Year's Day with Jannine. They're going to stay here for a week to help me out, which I'm really looking forward to!

The next week, my mom is going to stay with me for a few days to set up the nursery and get things clean and ready. I don't want to be caught with my proverbial pants down and not have the nursery ready by the time the babies come. If they come in the second half of February, they will probably have to spend at least a few days/weeks in the special care nursery (our hospital's low-level NICU), but at that point, I'll want to be with them as much as I can, so nursery prep will really screw up my available time. If they come in March, they may come right home. I'm not one to wait until the last minute for, well, anything, though, so I'll feel much more comfortable getting the nursery done and settled by early January. That timetable will also give me time to buy the things that the babies don't receive for the shower that they'll need. And I can only do a few hours' worth of any activity during a day (including sitting at a computer or at my table in my lair/craft room), so that stretches out the time I'll need for doing basic shopping.

Besides, the last trimester (for me, any time after Christmas, basically) with twins is a time of extreme discomfort. Many doctors want mothers of twins moving as little as possible and resting with their feet up as much as possible. Call it "limited bed rest" or whatever, but the more a mom moves around in the 3rd trimester in a high-risk pregnancy, the better chances for pre-term labor. We want to avoid that as much as possible.

I've already started getting a few things, care of my WONDERFUL local Mothers of Twins organization. When moms are done with certain things (gear, clothes, whatever), they give them or sell them to other members of the group. Well, I've gotten HUGE deals on changing table pads (the dresser/changing table I got in great shape from Craigslist), Boppies, a Fisher-Price swing and matching bouncey seat, a Peter Rabbit blanket, breathable crib bumpers. I'm hoping to grab whatever bargains I can from the group. Everything I've gotten is in nearly perfect condition. And most things are half to a quarter of the price of what you'd spend to buy them new. The women I've met through the group have been just amazing. Wonderfully nice and welcoming, genuinely excited to have more twins arrive and join the fold. I've been to one meeting so far (I'll go to tomorrow's meeting, too, to tie fleece blankets for an area NICU, if Paul is too tired to do anything after his red-eye and long trip to CA), and everyone is so nice. Genuine friendships are formed through the utterly unique experience of twin pregnancy and rearing and these women really rely on each other for advice and support when no one else in their lives truly understands what they're going through.

So it's late now and my back is hurting from sitting in my formerly comfy chair, so I'll sign off and try to get some sleep for my big day tomorrow. Not only the ultrasound appointment, but also our floor guy is coming in the morning to talk about finishing the part of the 2nd floor that Paul's been painting and we're getting a new fridge because ours has kicked the bucket. All before noon. :-) I'll try to update later today (I'm making an effort to get this blog going again, after more than a year without any posts!) to share the gender news, but I may let that wait until Friday.
Posted by Dana Gillin at 1:08 AM 41 comments: